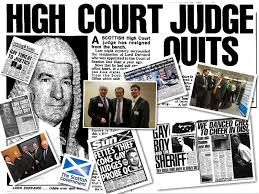 A man was arrested on Valentines Day and is still in jail on remand in Scotland, with bail having been refused on 3 occasions [99a] . What is it about this softly spoken genteel 68 year old man that has caused the Scottish establishment to arrange his incarceration for the second time?

Why does Alex Salmond continue to break the law, defy the Information Commissioner and refuse to hand over the information that was given to him and the date it was given? [109][110].

What is the connection between this mans imprisonment and the following?
Four Sheriffs and…