Mac’s cartoon in the Mail, the symbolism of the rat, and Der Ewige Jude (1940)

Various people on social media have pointed the resemblance to a cartoon in the Viennese newspaper in Das Kleine Blatt, published on February 2nd, 1939, depicting a group of rats, literally swept out from Germany, being denied entry to ‘democratic’ countries. This resemblance has been reported on in The Independent. 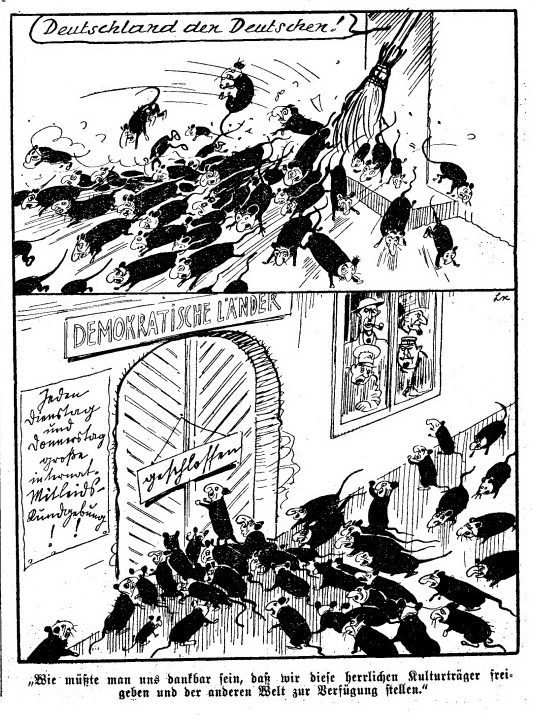 But the rat association has a long history in anti-semitic and Nazi propaganda. Cosima Wagner wrote in her diary in January 19th, 1879:

At supper yesterday he [Richard Wagner] talked about an article in the Illustrirte Zeitung, ‘The Elk Fighting the Wolves,’ and said it had taught him some very curious things – how in Nature even the most heroic must perish, men as well as animals, ‘and what remain are the rats and mice – the Jews. (cited in Richard H. Bell, Wagner’s Parsifal: An Appreciation in the Light of His Theological Journey (Eugene, OR: Cascade Books, 2013), p. 9, n. 50)

In December 1927, Der Stürmer printed a picture of a tree surrounded by dead rats, which are labelled ‘stock exchanges,’ ‘the press,’ and ‘trusts’, while the branches of the tree, labelled ‘Germany’ are industry, agriculture, commerce, the arts, business, the sciences, social welfare, civil service, and workers. The rats have been pumped with poison gas by a Nazi stormtrooper – the implications of this are obvious. The text says ‘Wenn das Ungeziefer tot ist, grünt die deutsche Eiche wieder!’ (If the vermin is dead, the German oak grows green again!)

Julius Streicher, the editor of Der Stürmer, would write the following in the journal in 1938:

The Jews are a people of bastards, afflicted with all diseases, They are a people of criminals and outcasts. They are the carriers of disease and vermin among men . . . A rotten apple cannot be assimilated by a basketful of healthy apples. Mice and rats cannot be acknowledged as useful pets and live within the community     . . . . Bacteria, vermin and pests cannot be tolerated . . . for reasons of cleanliness and hygiene we must render them harmless by killing them off . . . Why should we repress our feeling for cleanliness and hygiene when it comes to the Jew?

In occupied Ukraine, the Nazis attempted to divide Ukranians and Jews, using a propaganda poster superimposing a rat on a star of David (which I think may be the image below, though this needs confirmation), whilst at the same time the NKVD, spying on Jews in New York, would refer to them as ‘polecats’ and ‘rats’ (Makubin Thomas Owens, ‘Divide and Conquer: The KGB disinformation campaign against Ukranians and Jews’, Ukranian Quarterly, Fall 2004).

The image of the Jew as rat, or lower than rats, was also exploited by T.S. Eliot (‘The rats are underneath the pile/The Jew is underneath the lot’) and Ezra Pound (writing of ‘importations ancient and modern from the sewers of Pal’stine’ and how ‘Christianity is verminous with semitic infections’), as has been traced by Anthony Julius (in his T.S. Eliot, Anti-Semitism, and Literary Form (London: Thames and Hudson, 2003), pp. 102-3).

But the most notorious use of this metaphor is in the 1940 Nazi propaganda film Der Ewige Jude (The Eternal Jew), directed by Fritz Hippler. In this a scene juxtaposes a passage about Jewish migration, especially from Eastern Europe, with rats emerging from a sewer, spreading disease wherever they go. The film explicitly says that ‘Parallel to these Jewish wanderings throughout the world is the migration of a similarly restless animal: the rat. Rats have been parasites on mankind from the very beginning. Their home is Asia, from which they migrated in gigantic hordes over Russia and the Balkans into Europe’. Watch the film from around 13’40” on here, especially the section at around 16’55”.

I cannot believe this resemblance is merely coincidental. What have we come to when a leading British newspaper is describing Muslim migrants and refugees to Europe using imagery and associations lifted directly from Nazi anti-semitic propaganda?

Addendum: Whilst I do not share the view of the cartoon presented here by Dave Brown, I would not advocate censorship, for reasons laid out in another blog post from last year.