Fiona Woolf – the untruth in her letter to the Home Secretary

Today the letter to the Home Secretary from Fiona Woolf, Lord Mayor of London and chair of the Independent Panel Inquiry into Child Sexual Abuse was published on the new website for the inquiry. Woolf’s letter, apparently declaring any conflicts of interest, contains the following passage concerning her relationship Lady Brittan, wife of Lord Brittan (formerly Leon Brittan), over and above the mention of dinner parties attended and so on:

For completeness, I also set out the contacts I have had over the years with Lady Brittan. I have met Lady Brittan on a small number of occasions for coffee from memory (as these dates are not always recorded in my diary). The last occasion was on 23 April 2013 at Lady Brittan’s residence. We met because Lady Brittan was interested in knowing about my preparation to be Lord Mayor. We also served as lay magistrates on a bench of some 140 magistrates in total. I do not recall serving in the same court at the same time but it is possible that this did happen on a rare occasion. We were both judges for the Dragon Awards in July 2014, a Corporation initiative which celebrates Community Engagement programmes. It recognises businesses and public offices that go above and beyond their core work to make a significant and positive impact on the regeneration of their local communities. The 2014 awards took place on 1 October 2014. Lady Brittan was one of the panel, which I chaired, for judging the awards; the panel met once on 14th July 2014. Lady Brittan did not attend the awards ceremony. As with the TheCityUK council, I shall no longer be part of the judging panel when I step down as Lord Mayor. It is my understanding that Lady Brittan has been a member for approximately eight years, which is before I joined the Corporation as an Alderman. I received an email from Lady Brittan about a charity event in which she was involved {Diana’s DIFC Super Hero Run 2013) and I made a donation {£50 in that case) on 19 May 2013, as I would to any charitable cause that I deemed worthy.

Apart from the charitable donation on 19th May, I have had no further social contact with Lord and Lady Brittan since 23rd April 2013 and have not spoken to either of them in person or by telephone since, other than disclosed in this letter.

But have a look at the following picture, taken from the Dragon Awards’ website for 2013: 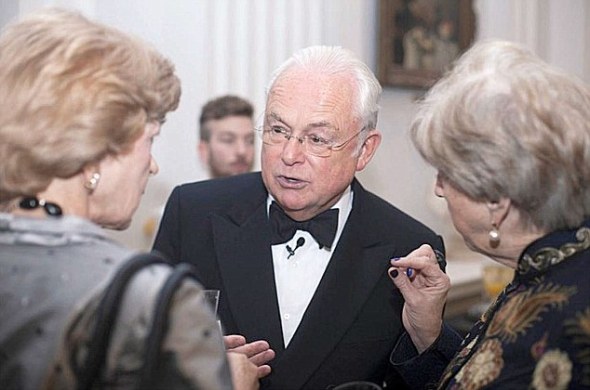 As pointed out in an article from September in the Mail on Sunday (Martin Beckford and Simon Murphy, ‘Pressure growing on abuse inquiry chief Fiona Woolf over new links to Leon Brittan’, Mail on Sunday, September 14th, 2014), this picture shows Woolf together with journalist Martyn Lewis and Lady Brittan. This event took place on October 2nd, 2013.

So, despite Fiona Woolf’s claims about not having spoken to Lady Brittan since April 23rd, 2013, she was photographed speaking to her almost six months later.

Either Woolf is mistaken or is lying. Neither option inspires confidence in her future chairing of the inquiry.

Here is the video of her evidence to the Home Affairs Select Committee today (October 21st, 2014), which I attended. See also the post on this on The Needle Blog, this post on Cathy Fox’s blog, and my earlier blog post on Woolf, Brittan and William Hague.