Culture in the EU (3): Bulgaria

And this is the 1973 film, Преброяване на дивите зайци/The Hare Census, directed by Eduard Zahariev (1938-1996). I can’t find a version with subtitles, but it is interesting to watch visually anyhow.

Here is some more information on this film.

The writer Nikolai Rainov (1889-1954) lived into the post-war era, but his work did not receive widespread distribution in Bulgaria until after the fall of communism. Here is an article on his writing.

Here is one set of translations from the Bulgarian poet Atanas Dalchev (1904-1978); another is here.

This article gives plenty of information on a more recent Bulgarian writer, Georgi Gospodinov (b. 1968); I am especially looking forward to reading the following 1999 novel, which has been widely translated:

Here is the website for Bulgarian sculptor Ivan Minekov (b. 1947).

Whilst here is the site for the couple Christo (b. 1935) and Jeanne-Claude Javacheff (1935-2009), installation artists about who there is much information on the web.

Here is some of the work of painter and sculptor Andrey Lekarski (b. 1940), representing in part an extension of some devices and aesthetics derived from surrealism and pop art. 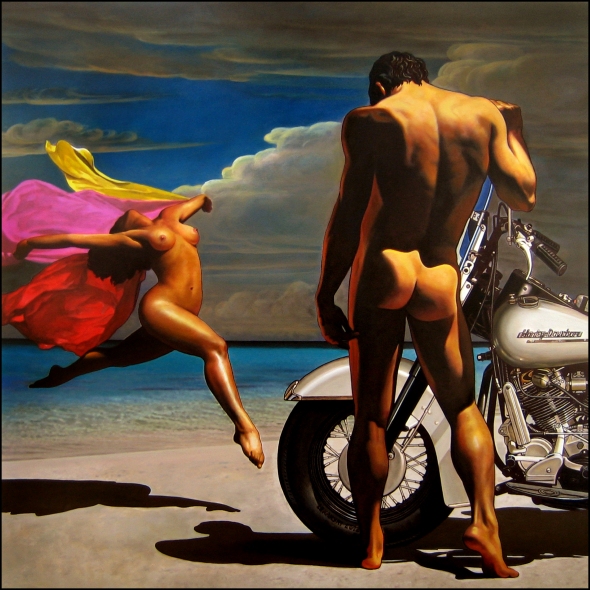 Here is the website for feminist performance artist Boryana Rossa (b. 1972).

And here is an interview with Rossa on art and politics:

Here are a selection of diverse works by contemporary Bulgarian composers:

And here is the amazing and idiosyncratic Bulgarian-born pianist Alexis Weissenberg (1929-2012):

The work of this ensemble, playing a music with roots in traditional Bulgarian folk music, was much admired by Frank Zappa.

And for another genre, here is some electronica from Ivan Shopov:

One of the most renowned public intellectuals anywhere is the  Bulgarian-born  Julia Kristeva (b. 1941); here is her official site, and here is an extended interview:

The following is a film about Bulgarian choreographer Mila Iskenova (b. 1960):

More on Iskrenova can be seen here.

This volume made a good deal of contemporary Bulgarian theatre available to English speakers for the first time in the 1990s:

And here is a biography of leading theatre practitioner Yordan Radichkov (1929-2004). Radichkov was notorious for his 1978 drama Opit za letene/Trying to Fly, about which one can read more here.

Finally, here is the website for architect Georgi Stanishev (b. 1952).