I received a phone call yesterday afternoon, from my former colleague at Dartington College of Arts David Prior, to tell me the terribly sad news that Bob Gilmore had died. I was completely shocked to hear this; I had known that Bob had been very ill with cancer for several years, and when I had last seen him in person (in Spring 2013, at a tribute concert in Cologne for Horațiu Rădulescu) he had looked much more frail and pale than the Bob I had known for a decade, bursting with life, wit and love for the music with which he was deeply engaged as both performer and writer. But I had thought that the treatment had gone well, and was unaware that his condition had looked terminal. Only two weeks ago, via private message on Facebook, I had been conversing with Bob about writing a piece on Morton Feldman for TEMPO magazine, of which he took up the editorship in mid-2013, succeeding Malcolm MacDonald, who himself died in May 2014 aged just 66.

I first got to know Bob personally in the early 2000s (having earlier known of him through his work on the composer Harry Partch), through our mutual interest in the music of Rădulescu, in particular at a pair of concerts I gave in King’s College featuring of all of the piano sonatas and some performances with cellist Cathy Tunnell, who was married to Rădulescu. Bob had such an innate sense of why this music was important and wrote eloquently on it; he also attended most performances in various countries with an almost religious devotion. But his musical interests were wide-ranging (though far from undiscriminating), involving a wide range of new music generally outside of what might loosely be conceived as an avant-garde mainstream, but with a special interest in microtonal composition, drawn to iconoclastic figures such as Partch, Rădulescu, James Tenney, Ben Johnston, Claude Vivier, Phil Niblock, Kevin Volans, Clarence Barlow, Christopher Fox, Frank Denyer, or Frederic Rzewski, all of whom he either wrote about or interviewed.

Bob taught for a long time at Dartington College, reaching the status of Professor there, until he decided he wished to spend more time performing with his group, Trio Scordatura (with mezzo-soprano Alfrun Schmid and viola player Elizabeth Smalt, Bob’s partner), so he moved to a part-time position at the music department at Brunel University. I took over his position at Dartington, which was my own first permanent academic position. Bob was extremely helpful from the outset, meeting on repeated occasions when I began (we overlapped for a couple of months and so shared an office briefly) to give me all of his wisdom on the department, the students, the wider college, and not least the town of Totnes (and all the various pubs there which we visited on various occasions, Bob’s own personal favourite being the Steam Packet) as well as helping with finding a place to live (in time I came to rent his flat in the town). He loved good food and good produce (which could be found plentifully in Totnes) as well as the many beers, wines and ciders to be found locally. It was clear after I joined just in what high affection Bob was held, both by students (undergraduate and postgraduate) and the rest of the music faculty there – Trevor Wiggins, Chris Best, Frank Denyer, Griselda Sanderson, David Prior, Catherine Laws. I recall clearly many of his witticisms remembered during staff meetings, often livening up proceedings there after he had left.

Bob was, in the best sense, a musicologist of the older school, who wished to focus upon composers and musical work, little enamoured of various new approaches and theories which were becoming fashionable in the discipline during his lifetime, and especially not of pointlessly jargon-filled prose of which there was far too much; his own writings and teaching were a model of lucidity. He wrote on music he cared about (though certainly not uncritically) and was engaged with a wider world of musical composition, performance and listening, in stark contrast to those musicologists who all too infrequently listen, and are more concerned to ingratiate themselves with other musicological factions for purposes of career advancement whilst attempting to write about music from a position of smug superiority. To spend pages and pages revealing all the reactionary aspects of a work or body of music would probably have appeared a pointless exercise to Bob, and I do believe, whilst not necessarily going the whole way methodologically with Bob, that much of his own writing, with its independence of perspective and acuity of aural perception, will stand the test of time much more than that of various others surfing the intellectual Zeitgeist.

Bob was also concerned about the fact that many music departments were being pressurised into turning into training colleges for rock guitarists and so on, a situation with which he was faced at Dartington. Nonetheless, like all of those who wished to hold onto the best of what Dartington had to offer in advance of the merger with University College Falmouth (before which merger Bob left), Bob was absolutely committed to the spirit of creativity, experimentation, and iconoclastic radicalism which characterised the college and informed the work of all who studied there.

He was immensely saddened by the premature death of Rădulescu in 2008; I sat with him at the funeral. Bob worked hard to make memorial concerts happen in Vevey, Amsterdam and later Cologne, all played and received with commitment and purpose. He was also very supportive towards Rădulescu’s widow Cathy, much younger than himself, during the difficult time she and her young daughter faced after the composer’s death.

Bob remained teaching at Brunel for about 5 years after leaving Dartington, then decided to bring this job to a conclusion so as to concentrate more on performing, editing TEMPO, and also taking up a new position as a Senior Research Fellow at the Orpheus Institute in Ghent. With hindsight, it is now clear that he knew his time was limited, and wanted to concentrate on finishing various projects while he could. His last publication was his long-awaited book on Claude Vivier, another musician who died much too young (at the age of 34) which has been much-admired since it appeared. Also, on his website, Bob made available a series of audio documentaries about various aspects of new music, entitled Tentative Affinities. He clearly was driven to get his various thoughts down in permanent form while he could. I strongly recommend all reading this do listen to these. His short tenure as TEMPO editor also won many admirers, preserving the best in terms of seriousness and accessibility pioneered by MacDonald whilst steering the journal in a direction involving more attention paid to younger composers and other musicians.

My greatest regret is not realising the seriousness of Bob’s condition in the last years, and thus not corresponding as often as I would have done so. I will miss terribly a friend I cared about and respected very deeply, and will miss joking, gossiping but also indulging in very serious intellectual debate whilst seeking out the best steak frites in Leuven, as I remember very fondly from 2007, when Bob was there for the premiere of Rădulescu’s last completed work, his Sixth Piano Sonata.

My thoughts go out to Elizabeth, and to Bob’s adult son Ben, himself a talented violinist.

A further tribute can be found on Kyle Gann’s blog, whilst a list of Bob’s writings can be found on his Wikipedia page (like all good scholars, Bob would raise his eyebrows at students relying upon Wikipedia, but he himself worked hard to keep various Wiki pages on the composers he cared about up to date).

Here is some of the music that Bob loved so much.

And here is a documentary on Harry Partch in which Bob appears to speak about his life and work.

Below are a selection of pictures. 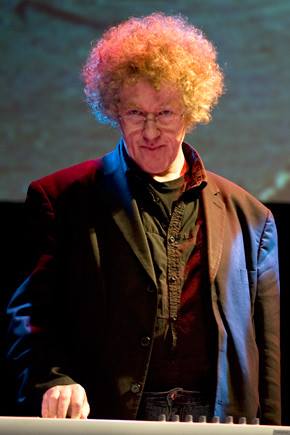 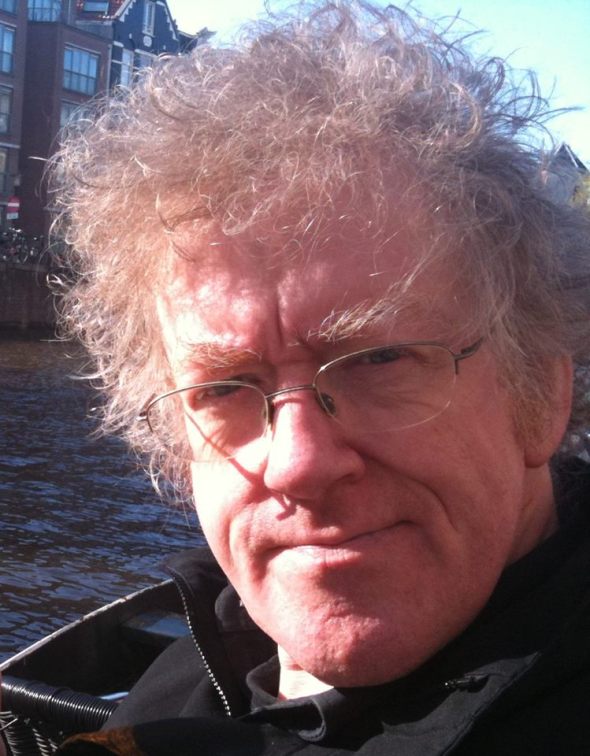 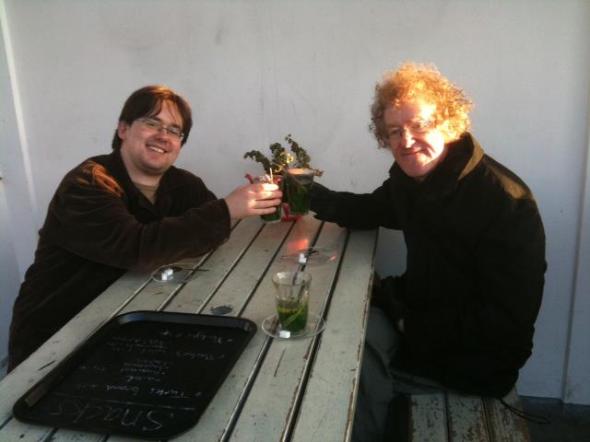 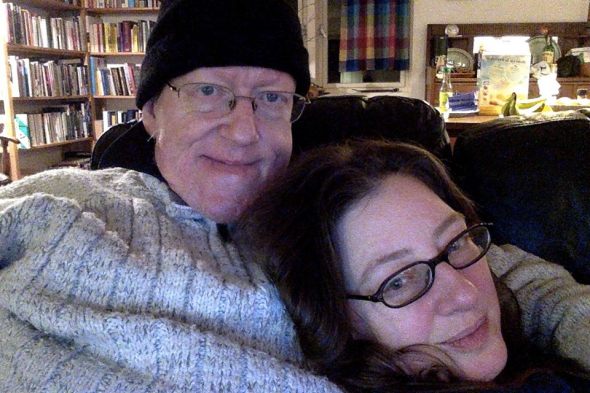 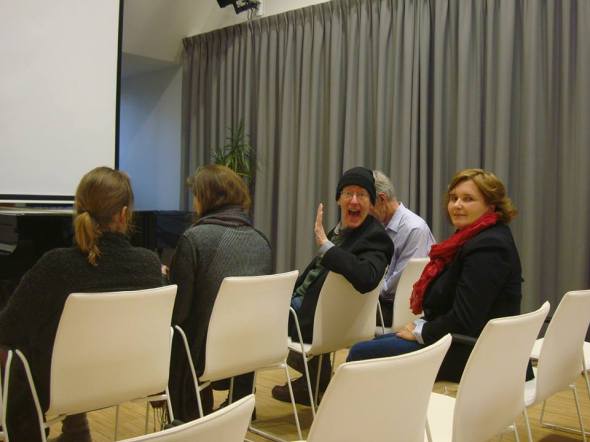 In his last year, Bob’s joy and humour were still absolutely evident. 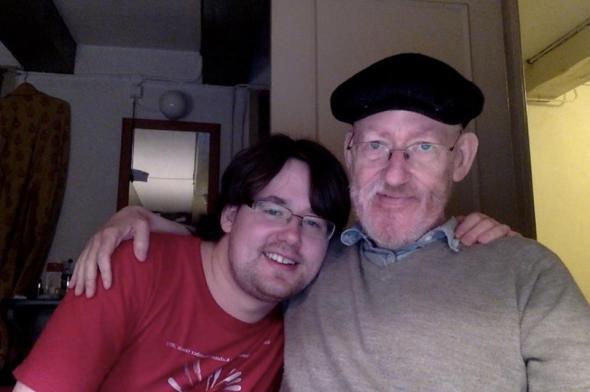