Bullying in the workplace appears to be a growing phenomenon, and is rarely taken seriously by managements or HR departments, whose first instinct is to back the bully when they are the one with the senior position. I cannot say a lot here, but I want to share information on this subject as much as possible – the more there is an increase in awareness, the more it might be possible to increase vigilance about it.

I have known a number of bullies over the years – there are many in both music and academia – and almost without exception they are deeply inadequate people who by chance have achieved some position for which they are not really capable in any way. Instead of doing the natural and decent thing – to try and learn more and gain skills and experience on the job, and learn from and respect where possible those who may not have their position of seniority – they are ever vigilant against anyone who might see them for what they are, and want to do everything they can to destroy such people, who they perceive as threats. Overpromoted, inadequate people tend also to try and recruit in their own image, and this is one way in which a culture of bullying becomes consolidated within an institution.

All lot of the ways in which bullies work are not necessarily that explicit or obvious to outsiders, and deliberately so, so then can easily be denied, and others can deny them do when it is in their interests to do so. They work subtlely, but relentlessly, to undermine their target’s confidence and standing, belittling and humiliating them as often as possible in front of others, singling out their faults in a way they would never do with others, to create a climate of fear, setting them impossible tasks which they are bound to fail, and much more. This will often occur over a long period of time. The effect is hugely corrosive, and all workplaces should have people monitoring for this happening.

Those who see it happening and exploit that situation to gain advantage for themselves, or simply allow it to happen, for it appears to be in their own interests mostly to simply ‘look after number one’. There are no tears of shame which are enough for those who take such an action. But this is common: bullying is rarely just one person against another, but a primary bully who mobilises others against someone, in a manner not unlike the head of a lynch mob or paramilitary organisation. Bullies create a toxic culture and atmosphere in any environment in which they are active; I want to say that they should simply be removed, always, but actually think that for the most part they are in serious need of help.

I have experienced sustained and vicious bullying myself, and seen it happen to others (and tried to help in the latter situations). Being in a vulnerable situation in part through work campaigning on child abuse (the personal effects of which I spoke about in an interview here), can make other forms of bullying and abuse seem all the more vivid. I remember seeing a young woman driven absolutely to the edge by a grotesque female boss who didn’t get her own way (and who had a particular hatred for intelligent younger women working under her, for all the feminist rhetoric she would spout otherwise) – the reluctance of almost anyone else to take this seriously was a disspiriting spectacle to behold, utterly consistent with everything I know now about those who see serious abuse going on in education and elsewhere, and think it most convenient to do nothing. 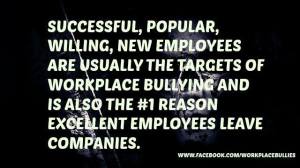 On the basis of this experience, I would say that if you know of someone being bullied, do the following:

(a) offer them help and support as much as you can.
(b) emphasise emphatically that person’s qualities, skills, abilities, and anything good about them, and tell others this. What bullies try to do is destroy someone’s self-esteem, to the point where they feel utterly worthless.
(c) under all circumstances that might arise, refuse to interact with the bully, and make sure they are called out for what they are publicly. Shame and exposure are what bullies most fear.
(d) point bullying victims in the direction of resources and information – realising one’s experiences are far from unique can be empowering.

Here is a list compiled by Stop Workplace Bullies on some of the symptoms of bullying, some of which are very familiar:

Bullying In The Workplace Can Cause Injury to health and makes you ill. How many of these symptoms do you have?

* constant high levels of stress and anxiety
* frequent illness such as viral infections especially flu and glandular fever, colds, coughs, chest, ear, nose and throat infections (stress plays havoc with your immune system)
* aches and pains in the joints and muscles with no obvious cause; also back pain with no obvious cause and which won’t go away or respond to treatment
* headaches and migraines
* tiredness, exhaustion, constant fatigue
* sleeplessness, nightmares, waking early, waking up more tired than when you went to bed
* flashbacks and replays, obsessiveness, can’t get the bullying out of your mind
* irritable bowel syndrome
* skin problems such as eczema, psoriasis, athlete’s foot, ulcers, shingles, urticaria
* poor concentration, can’t concentrate on anything for long
* bad or intermittently-functioning memory, forgetfulness, especially with trivial day-to-day things
* sweating, trembling, shaking, palpitations, panic attacks
* tearfulness, bursting into tears regularly and over trivial things
* uncharacteristic irritability and angry outbursts
* hypervigilance (feels like but is not paranoia), being constantly on edge
* hypersensitivity, fragility, isolation, withdrawal
* reactive depression, a feeling of weakness, lethargy, hopelessness, anger, futility and more
* shattered self-confidence, low self-worth, low self-esteem, loss of self-love, etc
* overwhelming fatigue
* pains in the joints and muscles with no obvious cause
* occasional bursts of energy, followed by exhaustion and joint/muscle pain
* inability to concentrate
* poor recall, words, sentence construction, etc
* mood swings, including anger and depression
* difficulty in learning new information
* sense imbalances, in smell, taste and appetite
* dislike of loud noises and bright lights
* inability to control body temperature
* sleep disturbance (sleeping by day and waking at night)
* disturbance of balance
* clumsiness, eg unable to grasp small objects, inability to separate sheets of paper

There is much information available online on bullying, and I would especially recommend this book.

Two excellent article I read recently are here and here; here is the UK government’s page on the subject, and here is an important site dealing with legal resources available to victims of workplace bullying. Another valuable sites is this, whilst this NHS resource suggests signs that one is being bullied (not all realise it at first), as does this guide.

Above all, it is the bully who needs help, and perhaps to leave the workplace, not their target.

In the last few weeks, more stories of sexual abuse in musical education, including new convictions, have come to light – I will be posting a summary of these later. But the subjects of bullying and psychological and emotional abuse, whether in musical education or the wider musical world, are easily sidelined and viewed is marginal in this context. They are not, and can be just as damaging as sexual abuse. A respected journalist in whom I have 100% faith will be preparing an article or articles looking at this wider and neglected (in part because not directly criminal) issue. I am posting this to invite anyone who would like to talk about this, either in terms of their own experiences or of things they have witnessed, or general perceptions, to contact me on ian@ianpace.com . Absolutely confidentiality is guaranteed, and will be guaranteed if you seek to talk to the press on the subject.

There are too many ruined lives, wasted careers, cases of depression, self-harm and even sometimes suicide because of the callous and malicious acts of others who are protected by the aura of the classical musician. Please help to raise public awareness of these things, in the hope that in time there will be real pressure for change.

Emotional abuse is not always recognised for what it is, and there has been much less attention paid to it in an educational context. Here is an important article considering the subject, and here is an earlier scholarly article. On bullying at work, I recommend this site, this and this; and see here for bullying from teachers. The subject of bullying in the classical music world has hardly ever been addressed seriously; here is an interesting online discussion on the subject.