Culture in the EU (1): Austria

As a solid supporter of the Remain campaign, in the 18 days from June 5th until the European Union Referendum on June 23rd, I am posting a selection of links and other information about music, literature, film, visual art, dance, architecture, etc., from each of the EU nations (I use the term EU to refer to all stages of the project, from the founding of the European Coal and Steel Community in 1952, then the European Economic Community in 1957, through to the European Community in 1993, until final subsumation in the European Union in 2009) . These selections are initially posted on Facebook, then blogged afterwards (including some suggestions from others). The eight nations with the largest populations (in descending order: Germany, France, UK, Italy, Spain, Poland, Rumania, the Netherlands) will get a whole day each, all others will get two days. Otherwise these will be in alphabetical order, as follows:

This novel in particular is a big personal favourite. 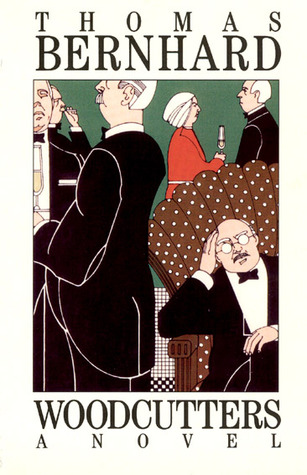 Another major Austrian writer (and equally misanthropic!) is the Nobel Prize winning Elfriede Jelinek (b. 1946), a site devoted to whom can be found here. Here is one of her most notorious books.

Anyone interested in experimental writing needs to look into the work of the Wiener Gruppe, not least this anthology. 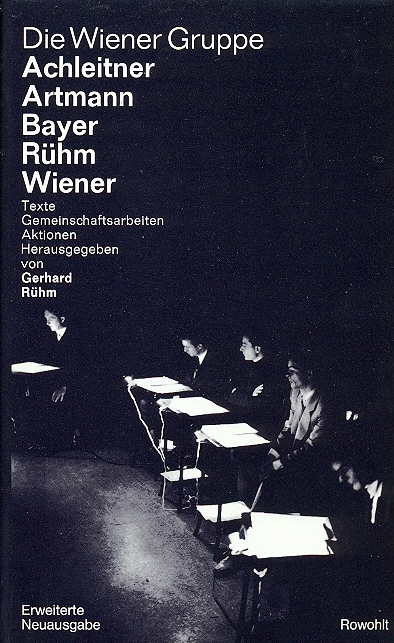 Here is a short article about the group and in particular leading figure Konrad Bayer (1932-1964). Also, here is an interesting article about Gerhard Rühm (b. 1930), whilst a range of his poetry can be read and listened to here.

Another vital, but distinct, experimental Austrian poet was the Dada-ist Ernst Jandl (1925-2000), a site devoted to whom can be found here.

Here is an informative doctoral dissertation on the Austrian avant-garde in general. And here is an interesting article on concrete poetry in Austria.

A very different type of Austrian writer is Peter Handke (b. 1942), whose more lyrical and expressive, though highly refined, work is known in part after having been filmed by the German director Wim Wenders.

Few movements in the arts can be considered as extreme, violent, and politically motivated as Wiener Aktionismus . A range of films from leading figures in the movement can be found here, and an important article (in German) here. Here are a selection of key videos by leading figures. First by Otto Muehl (1925-2013):

Then by Günter Brus:

Then, by the figure arguably with the most lasting impact, feminist performance artist Valie Export (b. 1940) (see her site here):

While not directly part of this movement, the work of film-maker Kurt Kren (1929-1998) shares a related sensibility:

Many more videos can be located online of these figures, all of which I strongly recommend.

A different type of radical film can be found in the work of Peter Kubelka (b. 1934):

Another type of avant-garde cinema can be found here in the work of Peter Tscherkassky (b. 1958):

More familiar to international audiences is the director Michael Haneke (b. 1942). Here is his 1992 film Benny’s Video:

And here is his 2001 film La Pianiste/The Piano Teacher based upon Jelinek’s 1983 book Die Klavierspielerin:

To my mind, no other film has captured the terrifying potential for harm and abuse in the world of the conservatoire, when inhabited by disturbed people, as this.

I could choose any amount of interesting Austrian new music (and might perhaps have done so on another day); for now, first here is a moderately early work by leading composer Beat Furrer (b. 1954):

Somewhat linked to the movement known as ‘new complexity’ is the composer Wolfram Schurig (b. 1967):

A wholly different world is found in the work of Klaus Lang (b. 1971):

The work of Karlheinz Essl (b. 1960), moves between composition, sound art, performance art, and improvisation.

Whilst Wolfgang Mitterer (b. 1958) is involved with both composition and improvisation:

And here are the Vienna Improvisers’ Orchestra:

Not to mention the Vegetable Orchestra, who play only on fresh vegetables:

Amongst many interesting Austrian contemporary painters, I am drawn to the work of Xenia Hausner (b. 1951) (various of whose work can be seen here) :

Here is a short article devoted to the opening of a new Tanzquartier in Vienna for the study of contemporary dance.

Here is an example of the work of writer and theatre practitioner Wolfgang Bauer (1941-2005):

Whilst I also find captivating the landscape architecture of Maria Auböck (b. 1951) and János Kárász, the website for whose firm is here. 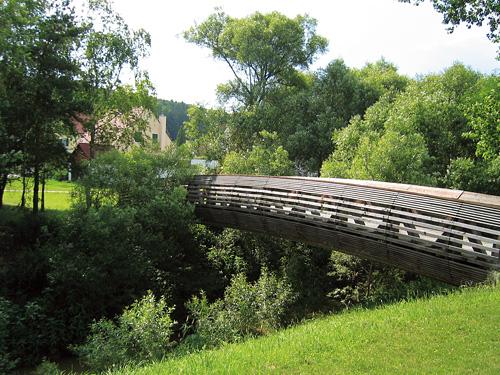 In Praise of Mic Spencer

Last night I went to a concert at Clothworkers’ Centenary Concert Hall, at the School of Music for the University of Leeds. The programme included postgraduate student Allanah Halay‘s Energy Cannot Be Created II, as well as world premieres of Scott McLaughlin’s an infinity of traces, without an inventory and Wieland Hoban’s Wyrdlines, Michael Finnissy’s 1984 Câtana, inspired by Romanian folk music. It was a fantastic opportunity to hear four very fine pieces in strong performances given by student musicians; the concert can be viewed complete online here. for now I want however to write about the conductor and director of the ensemble – and also extremely fine composer – Michael (known to all as Mic) Spencer, whose work at that university, making the department into the finest of its type for new music, has been to my mind insufficiently recognised. On another occasion I would like to write about Mic’s compositions, but here I want to describe the seminal work he has done at Leeds.

I first met Mic in 2005 (at the premiere of Richard Barrett’s orchestral work NO) and soon afterwards became keenly aware of his activities at Leeds, after going to give a talk there the following year, performing on three occasions at the university, playing his piano piece The Eemis Stone and more widely getting to know the important community of people intensely dedicated to new music which would never have come about without Mic and his efforts.

Whilst many in academia spend as little time as possible on students, concentrating instead primarily on whatever will gain maximum prestige and the quickest advancement to the top jobs, Mic is the very opposite, and one of the most selfless figures I know. I know of few others so utterly devoted to helping to make available and accessible to his students, in full knowledge that the most complex or challenging new music is absolutely graspable by all who are open-minded and receive the type of guidance and encouragement that Mic can uniquely give. And I have seen for myself just how much time he devotes to students, how he wouldn’t hesitate to help them have access to any number of recordings, scores, or texts by many in the French and German intellectual and philosophical traditions to which he is so strongly attached.

The music of Helmut Lachenmann, Brian Ferneyhough, Hans-Joachim Hespos, Gérard Grisey, Emmanuel Nunes, Mathias Spahlinger, James Dillon, Beat Furrer, Richard Barrett, Chaya Czernowin and many others have become like Mozart and Beethoven to composers, performers and scholars at Leeds all because of Mic. In other contexts, academics dismiss all work in this type of European modernist tradition out of hand (sometimes in an underhand manner, using language of identity politics which makes others reluctant to challenge such a view), or simply preach it in a didactic way. Everything I have heard suggests a quite different approach from Mic: teaching as an enthusiast, with a passion for this music, but in such a way as allows students to find their own way in.

But equally important is what Mic has achieved with the ensemble LSTwo, which he ran and conducted over an extended period, for a period jointly with composer and conductor Adam Fergler. They have been able to perform well works almost unimaginable for a student new music ensemble in a UK university department, including Lachenmann’s “…zwei Gefühle…”, Musik mit Leonardo, Harrison Birtwistle’s Trageodia, Grisey’s Vortex Temporum, Nunes’s Improvisation I, Furrer’s Gaspra, Dillon’s Zone (…de azul), James Clarke’s Delmenhorst, and much else. In November there will be a major feature, the most significant of its type to date in the UK, of the music in Hespos, which I for one would not want to miss.

Amongst those who have passed through Leeds and either already gone onto great things or in the process of so doing are Lauren Redhead (who I remember Mic describing to me, when she was an undergraduate, as someone with an unnatural obsession with Spahlinger), Roddy Hawkins, Eleri Angharad Pound, Adam Fergler, Vicky Burrett, Caroline Lucas, Marcello Messina and many others. Not that these are simple acolytes or devotees; many have strong differences and have taken quite different paths in terms of their own music or ideas. I certainly wouldn’t agree with Mic on lots of things musical, aesthetic or otherwise – I cannot remotely share his taste for the likes of Kaikhosru Shapurij Sorabji or writer Aleister Crowley, for example – but there is no such topic about which I would not be intensely interested in his thoughts. But I do not believe it would be too exaggerated to talk about a Leeds School of New Music, for which Mic is undoubtedly the central figure.

But when reading this I’m sure Mic will end up acting self-effacing and maybe a bit embarrassed, so I’m going to end up in his own language and tell the fucker to get a move on with writing his piano piece for me!

But do all raise your glasses (an activity with which he is intimately familiar) to Mic.