18th-25th January 1975: Letters regarding the Albany Trust’s links with PIE (The Times)

November 1975: ‘Evidence on the law relating to and penalties for certain sexual offences involving children – For The Home Office Criminal Law Revision Committee’ aka ‘The PIE manifesto’

Between 1978 and 1984, the Home Office was located at 50 Queen Anne’s Gate, next to St James’s Park in central London. During this period, it was also the unofficial headquarters of the Paedophile Information Exchange (PIE), an organisation that campaigned for the age of consent to be lowered to 4 years old. PIE’s chairman, Steven Adrian, worked at the Home Office (officially as a security contractor), but used his office to contact PIE members and organise meetings using a Home Office telephone extension, and print PIE magazines. PIE’s Secretary and Treasurer, Barry Cutler, was also employed at the Home Office at this time. The Home Office’s Voluntary Services Unit (headed by a PIE-supporting senior civil servant called Clifford Hindley) provided £70,000 worth of funding for PIE between 1977-1980.

50 Queen Anne’s Gate is approximately 100 metres from New Scotland Yard, the headquarters of the Metropolitan Police, who were…

This 1977 newspaper cutting corroborates Tom Watson’s recent claim that the Home Office may have funded the Paedophile Information Exchange. The funding came from a branch of the Home Office called the Voluntary Services Unit, and was channeled through the Princedale Trust and the Albany Trust. The concerns were raised by a backbench Conservative MP called Bernard Braine.

This means that two successive Labour governments funded an organisation that wanted the age of consent lowered to 4 years old. It’s still unknown whether this funding carried on into the Thatcher years. 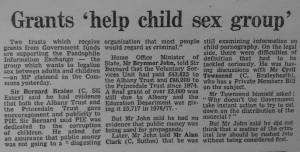 In 1982 a Cheltenham taxi driver called Geoffrey Prime was arrested for sexually assaulting two young girls. His wife then reported her suspicions about him to the police, and it transpired that he had been selling state secrets to the Russians during his previous employment in GCHQ. He had been a spy for over 14 years and had also worked in the Foreign Office and the RAF.

On 20th July 1982, Margaret Thatcher told Parliament that Prime had been charged under the Official Secrets Act. (Guardian 21/07/1982)

On 10th November 1982 Prime was jailed for 38 years, which at the time was one of the longest sentences to be handed down by a British court. “Geoffrey Prime, sentenced to 38 years’ jail yesterday, was rated by the Americans as the most important Russian spy since the war” 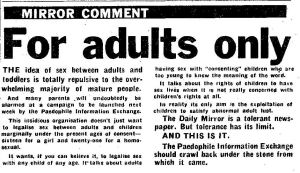 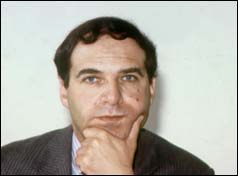 Leon Brittan became Margaret Thatcher’s Home Secretary on 11th June 1983. Not long after starting in the role, he came under pressure to ban an organisation called the Paedophile Information Exchange.

The Paedophile Information Exchange, or PIE, campaigned to have the age of consent reduced to 4 years old, which would have effectively legalised paedophilia. PIE published a contacts page in its newsletter with a PO Box number, so paedophiles across the UK and abroad could forge links and trade tips on how to access children, and how to obtain images of child abuse. This was how organised paedophile networks developed in the UK, and helps to explain how paedophiles ended up infiltrating so many schools, children’s homes, and other institutions. By the early 1980s PIE had over 1000 members, including people in prominent and powerful positions in the British Establishment such as diplomats, MPs, aristocrats, intelligence…

BBC presenter was linked to the Paedophile Information Exchange

Apologies if people have seen this before, but I just found it and must have missed it first time round. This article was published in the Mirror the day after Tom Watson’s PMQ in October.

PIE, which is now outlawed, also had links with another BBC presenter who was investigated over child sex allegations in the late 80s. Like Savile, the unnamed star was accused of using a charity as a cover to abuse vulnerable children. The charity was set up by a PIE member in the 80s, offering yachting classes to vulnerable and underprivileged children.

The BBC presenter was ­investigated after police became aware of allegations he was abusing boys during sailing trips. No charges were ever brought against the star for reasons that remain unclear.A child protection source said yesterday: “The presenter was going out on a boat with vulnerable children and a leading former member of PIE.

In 1996 Peter Tatchell wrote Ian Campbell Dunn’s obituary in The Independent, which described him as “a pioneer for lesbian and gay human rights, remaining a central figure in the battle for homosexual equality – in Scotland and internationally – for 30 years”.

What Tatchell failed to mention is that in 1974, Ian Campbell Dunn co-founded the Paedophile Information Exchange (PIE), a group that wanted the age of consent reduced to 4 years old and advocated sex with children.

In March 1984 the Sunday Mail, a Scottish tabloid newspaper, printed a story which alleged that Dunn “allows his flat to be used as the main contact address for Britain and the whole of Europe for paedophiles”. This was around the time the Paedophile Information Exchange were coming under pressure from Geoffrey Dickens, so it seems Dunn’s address was being used as a new contact point in case PIE was…

The Albany Trust and the Paedophile Information Exchange

The Albany Trust was funded by the Home Office’s Voluntary Service Unit. The Albany Trust used some of that money to fund the Paedophile Information Exchange (more). Below are a series of letters from The Times concerning the Albany Trust’s support for PIE. 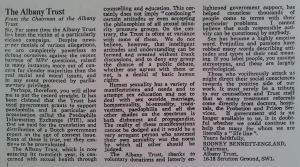 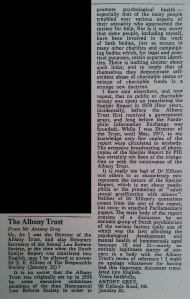 And another letter from The Times by Tony Smythe, the Director of MIND and a former trustee of the Albany Trust, about MIND’s association with PIE.

The two Guardian ‘London Letter’ columns below were written by John Torode (nothing to do with Masterchef). One of the letters criticising Torode’s anti-paedophile stance is by Glenys Parry, vice-chairman of the Campaign for Homosexual Equality, and also a supporter of Paedophile Action for Liberation who featured in the Sunday People story ‘The Vilest Men In Britain‘. 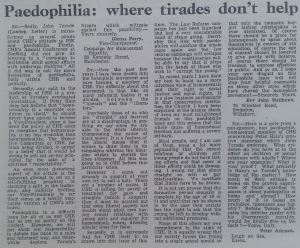