← Proposed Guidelines to protect both Music Teachers and Students – a starting point for discussion
Peter Hayman, PIE and PREM 19/588: An Alternative Account → 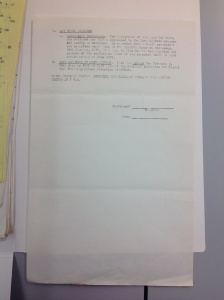 Within 9 months of starting ACCESS Righton’s ‘enforced withdrawal’ from Chairmanship takes place due to potential adverse publicity  – just after The Times announces him as Director-Designate heading up a two-man team at the National Children’s Bureau. [ https://spotlightonabuse.wordpress.com/2013/12/16/the-national-childrens-bureau-12-05-93/

On 8th December ACCESS met at the National Institute of Social Work with only 5 attendees: Peter Righton (Chair), Doreen Cordell (Secretary), Rev. Malcolm Johnson, David Allen (Honorary treasurer, formerly in same role for Albany Trust but left due to Michael De La Noy), and Dr Theo Schlict. Looking at the minutes, it may be that Righton had already wished to make the announcement that he had been forced to step down as Chairman at the 8th December meeting but due to the poor attendance held back his news on being…