With profound thanks to Tom Bateman, producer at the BBC Radio 4 Today Programme, for providing me with a copy of this, I am reproducing a passage from the so-called ‘Barclay Report’: Social Workers : Their Role & Tasks : the report of a working party set up in October 1980 at the request of the Secretary of State for Social Services by the National Institute for Social Work ; under the chairmanship of Peter M. Barclay (London : Published for the National Institute by Bedford Square Press, 1981/1982 [printing]), to draw attention to the following passage from page ix:

‘We pay tribute to the work of our Secretary, Mr Bob King, of Mr Peter Righton, formerly Director of Education at the National Institute, who has shouldered a considerable drafting burden and of Miss Carol Whitwill, their personal secretary and helper.’ 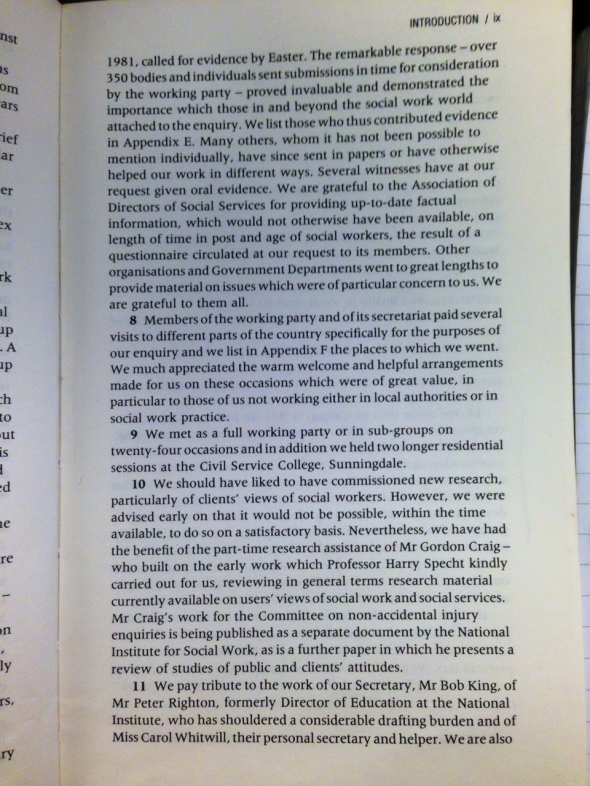 Here is PDF of an earlier article by Righton from 1972, entitled ‘Parental and Other Roles in Residential Care’, from The parental role : conference papers (London : National Children’s Bureau, 1972).

Peter Righton – Parental and Other Roles in Residential Care

Furthermore, I would like to draw people’s attention to this important article from 2013 by Keir Mudie for The People on Righton:

‘We Can Look after You. I Have a Friend Who Works in the GOVERNMENT; VIP PAEDOPHILE SCANDAL’

NOTORIOUS paedophile Peter Righton boasted of links to powerful figures in government, according to new testimony from one of his victims.

Speaking out for the first time, the man claims Righton’s evil network stretched to the top of the UK establishment.

As well as naming a senior UK politician, the victim also told us Righton – once the most respected childcare expert in Britain – brought him into contact with paedophile MP Cyril Smith.

He said: “People have talked about a paedophile ring working in the UK.

“This was not just a ring – it’s more like the Olympic rings, interlocking on a large scale. It went everywhere. I believe it went to the heart of the Establishment.

“It needs to be investigated properly.”

The new revelations back up MP Tom Watson’s claims in Parliament that Righton was linked to a VIP child abuse network that reached as far as 10 Downing Street.

The victim, now in his 40s, told how Righton and members of his infamous Paedophile Information Exchange groomed him and sexually abused him in London from the age of 11 in 1977 until he was 16.

He said Righton told him: “We can look after you and protect you. I have a friend who works in the government. He will be able to help.”

Righton named the man, whom we cannot identify for legal reasons, as a former senior government minister.

The victim, who fell into Righton’s clutches while at a school for troubled youngsters, also claims disgraced Liberal MP Cyril Smith had links to the network.

He told us: “There was one time I was out with Righton in one of the parks.

“He stopped the car and got out and went to speak to a guy, a big fat bloke.

“Righton kept pointing at me in the car and this fat man was looking over and smiling. It wasn’t until many years later I realised it was Cyril Smith.”

The victim has agreed for the Sunday People to pass his details to Scotland Yard’s Operation Fairbank, which is investigating allegations involving Righton, now dead.

In a linked probe, Operation Fernbridge is investigating the notorious Elm guest house, south-west London, where VIPs including Cyril Smith – who died in 2010 – allegedly abused boys from a care home. The property is now private flats.

There are extremely serious questions to be asked about how Peter Righton, who was openly listed in the pages of PIE publication Understanding Paedophilia as one of the ‘magnificent six’ people (together with Keith Hose, Warren Middleton, Tom O’Carroll, David C. Grove and Charles Napier) who made up the executive committee (see Vol. 1, No. 2, June-July 1976, here) – his position was listed as ‘Organiser of prison-hospital visits/general correspondence/PIE befriending’ – was able to obtain such a degree of influence within the social work profession and, if the article above is correct, how he might have been protected at the highest level. Many other articles on Righton (various of them linking to the Spotlight blog) can be found here.